The Scottish Cricketer’s Association (SCA) was founded in March 2017, being set up by Scottish players, for Scottish players. The core role of the SCA is to represent the collective interest of the players both on and off the field, looking to ensure that playing professional cricket in Scotland continues to move towards becoming a viable, secure career path for athletes in Scotland. It also looks to work closely with governing bodies to grow the game in Scotland and promote cricket in Scotland globally.

SCA believes in a strong and vibrant game in Scotland which allows all members of the Scottish national squad to build a viable and successful career in a safe, competitive and rewarding environment. SCA acknowledges the reality of where the game in Scotland finds itself today. It identifies the challenges that cricketers associated to the national team have faced and the direction that the game has taken. It therefore seeks to work with the administrators and governing body, and in support of its established Principles, in representing the views and interests of cricketers in and around the Scotland squad. More 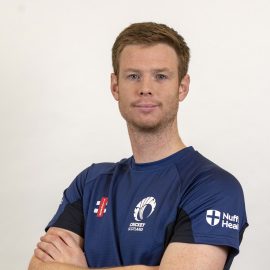 Alasdair (Ally) had both his academic and cricketing education in Edinburgh. Being schooled at George Watson’s College he joined local cricket club, Carlton CC, as a junior and his passion for cricket has never looked back.

Ally has been in the Cricket Scotland set up since the age of 13. He went all the way through the age group programmes until making his debut for full senior side in 2009.

He also went on to study Psychology at Loughborough University, where he gained a Bachelor of Science degree in 2010. Whilst at university he was part of the very successful MCC Universities programme.

This background was part of the springboard that led him to be signed by Derbyshire County Cricket Club in 2011. He spent three seasons with them before returning to Scotland.

Ally also spent some time at CALA homes in 2017, working in their HR department. This provided him with valuable in-depth experience of Human Resources and Management.

Ally was elected as the SCA first president on its formation in 2017. He was then elected onto the board of FICA (Federation of International Cricketers’ Associations) the following year, after the SCA gained membership to FICA.

He is a driven, passionate man who constantly strives to push the needs of professional players in Scotland on and off the field. 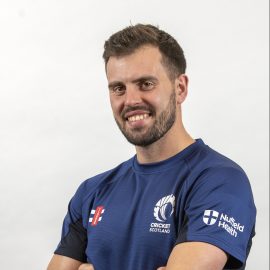 Calum has been in the Scotland set up since the age of 10 working his way up to a full debut in 2007. Originally a fast bowler Calum has transformed himself into a top order batter and currently holds the record for the most ODI hundreds for Scotland, this includes a career highlight of scoring a 140 not out in Scotland’s historic win against England in 2018.

Having represented Cricket Scotland over 150 times he is driven to see Scotland progress as a team and organisation to ICC full membership status.

Having been in the Scottish cricket set up from such an early age, gives Calum the experience of not only seeing the formation of the professional game in Scotland, but also its evolution. This wealth of knowledge gives him the prefect insight into where the players have come from and aspiration to drive them forward.

As vice president of the SCA he is passionate about the work the organisation is doing in improving the needs of professional cricketers in Scotland in all aspects for their life and career. 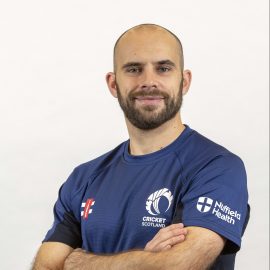 Kyle is a very welcoming, determined and passionate person. He has a patriotism towards Scottish cricket with a goal to see the nation’s players achieve ICC full member status. Kyle was born in Aberdeen and went to Aberdeen Grammar school and starting his cricket at Inverurie & Stoneywood Dyce CC. Kyle followed his father and two elder brothers into cricket where the 3 brothers all went through the Cricket Scotland age group system. Kyle spent 14 years on the county circuit with stints at Durham and Northmaptonshire CCC and is currently full time with Cricket Scotland where he is the national captain. At a young age he was seen to have leadership qualities and throughout his career Kyle has captained at junior level into senior cricket for Scotland, Caley Highlanders, Durham, Northants and including a franchise tournament in Nepal with Pokhara Rhinos.

Kyle has had his eye on developing himself for life after cricket. He has spent the last 2 and a half years studying to achieve his ECB level 4 master coach qualification through Gloucestershire University, which he has now completed. With his studying now finished his attention turns fully back to his own cricket and captaincy role with the national team and his work developing the Scottish Cricketers Association. When away from national duties, he shares his coaching commitments with Benwell Hill CC where he is the director of cricket.

In 2017 Kyle was elected onto the first ever board when the SCA was formed and not long after that he was voted onto the ICC players committee which he still currently sits on. 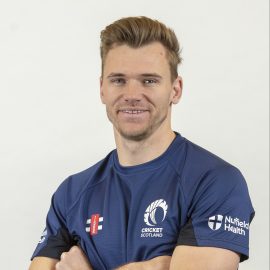 Richie was born in Pretoria, South Africa and moved to Scotland at the age of 11. His secondary education began at Greenock Academy and after taking part in a kwik cricket tournament he was invited to join local cricket club Greenock CC.

Richie was soon involved in the Cricket Scotland junior programme at U13 level and progressed through the age groups and to the A team before being selected for the national side in 2008. Cricket has always been his passion and after leaving school he spent winters travelling abroad to play in various cricket academies around the world in order to pursue his dream of becoming a professional cricketer in Scotland.

This dream was realised in 2009 when Richie gained one of the first professional contracts to be given out by Cricket Scotland, a year after the introduction of contracts. Since then he has been an ever present in the squad and has seen the continually transformation of the professional game. This experience gives him ideal knowledge to help support the interests of all professional cricketers in Scotland.

Having joined Clydesdale cricket club in 2014 he has taken the opportunity over the past two years to gain work experience outside of playing professional cricket. He was given the opportunity by Prosperity Financial Solutions – sponsors of Clydesdale cricket club – where has been working hard to gain new skills in the financial sector. Since his time there he has managed to gain the CF6 qualification module on his path to becoming a qualified mortgage advisor.

He is extremely passionate about Scottish cricket and is determined to continually improve the sport on and off the field. He hopes through his experiences within the Scottish set up and being involved in the successful launch of the SCA he can continue to drive the progress of the game forward and endeavour to support the team in all aspects of their practise. 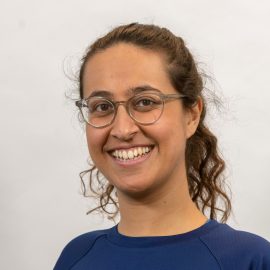 Priyanaz, a proud Dundonian, joined her local cricket club Forfarshire C.C at the age of 6. There she played age-group cricket before making appearances for the senior teams as a teenager.

After university, she travelled to Australia where she played A-grade club cricket in Western Australia before returning to the UK and starting a job at Element Energy, a London based low-carbon energy consultancy. 5 years on, she continues to work there as a strategy consultant, supporting public and private sector clients in the transition towards a zero-carbon economy.

Priyanaz joined Surrey CC in 2017 where she played three seasons, after which she travelled to New Zealand for another season abroad. Here she represented state team, Wellington Blaze, in the domestic competition.

Priyanaz was elected to the SCA board in 2019 and is also a Scotland player representative in FICA’s player advisory board.

Priyanaz is passionate about driving forward the game of cricket, with a particular focus on the women’s game, in Scotland and beyond.

Get in touch with us